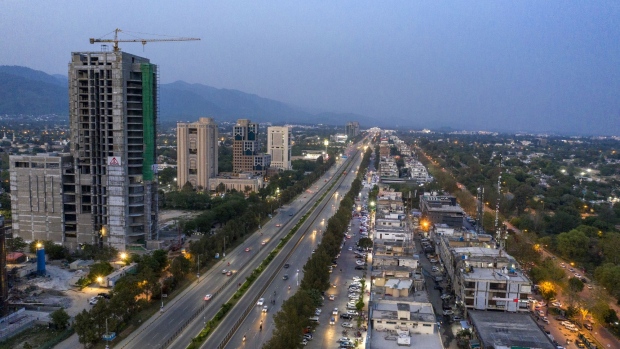 May 25, 2022 (MLN): With spiraling inflation, squabbles over fuel prices and political crisis, Pakistan has struggled hard to keep its economy afloat for months, raising the prospects that the country could be another Sri Lanka in a wave of potential global defaults, a recent report by Bloomberg warned on Wednesday.

The nervousness can be seen in markets. Without a bailout from the International Monetary Fund (IMF), the country may default for the second time in its history. As talks with the IMF conclude Wednesday in Doha, officials acknowledge that winning a loan from the fund might involve trade-offs, including the politically tough decision of raising fuel prices.

“We are confident we’ll get to the finish line,” Murtaza Syed, acting governor of the State Bank of Pakistan, said in an interview with Bloomberg TV on Tuesday.

With a barrage of financial shocks caused by the pandemic, Russia’s war in Ukraine, and rising interest rates, Pakistan is one of several emerging economies facing debt restructuring.

The incumbent government is seeking the release of $3 billion from the IMF. That amount would augment the nation’s foreign-exchange reserves, which at $10.2 billion, cover less than two months of imports. The government is staring at a $45 billion trade deficit this year.

The bond market has been pointing toward rising concern.

Pakistan’s dollar notes due in 2031 have dropped about 14 cents this month — even after rebounding some Tuesday and Wednesday — to 63 cents. Investors generally view prices below 70 cents on the dollar as indicating distress and an increased risk that borrowers may face future challenges meeting obligations if conditions deteriorate, the report said.

Political crisis amid fighting between the government and former Prime Minister Khan and fuel subsidies have complicated a path forward with the IMF.

The capital is bracing for unrest due to barricades placed in several places including Red Zone, Parliament, embassies and the prime minister’s offices. The government has said demonstrations won’t be allowed, raising concerns that more mayhem and social unrest could follow.

A sticking point for the IMF connects to Imran Khan’s tenure. Before leaving office in April, he reduced fuel and gasoline prices and then froze them for four months, a last-ditch attempt to improve his image among voters and quell frustration over rising costs, it added.

But the IMF has delayed giving Pakistan more money until the government scraps the fuel subsidies. And Imran Khan’s successor, Shehbaz Sharif, has deferred raising prices despite the subsidies costing $600 million a month. The government has resisted angering a population already struggling to afford staples like wheat and sugar.

“Three weeks ago, I would have said there’s a 0% chance of Pakistan becoming the next Sri Lanka,” said Mattias Martinsson, a chief investment officer of Tundra Fonder AB in Stockholm. “The inaction of the new government is, however, worrying.”

For now, at least, Pakistani officials say they are confident of finding a middle ground with the IMF, even if the subsidies remain.

In the Bloomberg TV interview, Murtaza Syed said “gaps are being closed.” He expressed optimism that IMF money would enable the country to easily fill funding holes until the end of the next fiscal year. Apart from reviving a rescue package from 2019, Pakistan is asking for an additional $2 billion from the IMF.

Edwin Gutierrez, London-based head of emerging-market sovereign debt at abrdn plc, which owns Pakistan’s bonds, said the company is comfortable with some volatility and doesn’t plan to sell its holdings.

“It will be a rocky path given the politics, but in the end, neither Pakistan nor the IMF will be walking away,” he said.