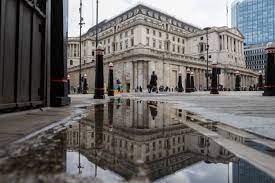 November 03, 2022 (MLN): The Bank of England (BoE) on Thursday raised interest rates by 75 basis points, its largest single hike since 1989, but struck a dovish tone as policymakers looked to temper market expectations for further aggressive monetary policy tightening, as reported by CNBC.

The 75 basis point increase takes the Bank Rate to 3%, its eighth consecutive hike to the main lending rate after the Monetary Policy Committee voted 7-2 in favor. One member voted for a 0.5 percentage point rise while one preferred a 0.25 increase, it added.

“The majority of the Committee judges that, should the economy evolve broadly in line with the latest Monetary Policy Report projections, further increases in Bank Rate may be required for a sustainable return of inflation to target, albeit to a peak lower than priced into financial markets,” the MPC said, offering uncharacteristically specific guidance to the market.

The MPC noted that its updated projections for growth and inflation indicate a “very challenging” outlook for the U.K. economy as it looks to bring inflation back toward its 2% target. U.K. GDP is projected to decline by around 0.75% over the second half of 2022, reflecting the squeeze on real incomes from surging energy and tradable goods prices.

Growth is projected to continue to fall throughout 2023 and the first half of 2024, as “high energy prices and tighter financial conditions weigh on spending,” the Bank said.

Economists had anticipated a less hawkish tone from the central bank after the change in the U.K. government.

New Prime Minister Rishi Sunak’s likely return to a more conventional fiscal policy after the brief and chaotic tenure of predecessor Liz Truss calmed the markets and meant that monetary and fiscal policy was no longer pulling in opposite directions, it noted.

SBP rebuts placement of any restriction on LCs